This post was inspired by ermilia blog  and abakinglife after they posted their rather disastrous attempts at cakes and pies which made me chuckle and not feel so alone because all of us that bake will have disasters along the way.

After watching the Great British Bake Off masterclass episode 9 I felt inspired, invincible and filled with confidence that I could follow the instructions that the Queen of Baking (aka Mary Berry) had generously shared with us mere baking mortals. She promised that any baker could try her coffee and walnut battenberg cake recipe and would be rewarded with a professional looking cake. Mary sadly has never met me then! 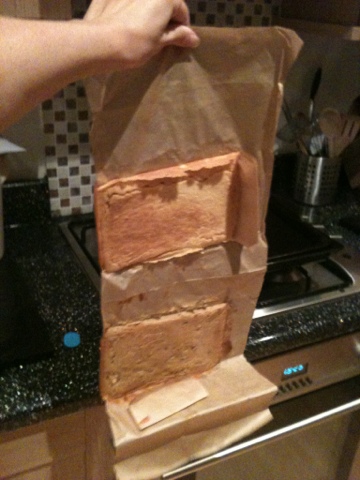 I read through the recipe countless times and even did some artistic origami to divide my tin into 2 halves and reduce the size as I did not have the right size tin.  I struggled to make the mixture cover the base of the tin but the words Mary Berry uttered echoed in my head ‘always trust my recipes they are never wrong’. After placing it carefully in the oven and muttering words of prayer I then endured a nerve-wracking 25 minute wait all the time resisting temptation to open the oven and take a sneaky peak.

The moment of truth had arrived the smell filled the kitchen so I was hopeful.  As I pulled the cake out of the oven Mary Berry fell off her baking throne. I have never ever seen such a flat cake in my life!  If you look carefully you can still see my attempts at oragami style baking paper stuck at the ends.

Dear Mary Berry, I am very disappointed that after watching you tell amateur bakers to trust your recipes as they are never wrong I would like to disagree. I don’t think you cake was supposed to end as a biscuit nor did I expect to be able to hold it in the air at any angle and it not fall off the baking paper.  My next door neighbour was very amused when I held it over my head and it still did not fall off.  I would however recommend my cake as a self-defence weapon, door stop or even an emergency tena lady. Regards J

I was rather surprised when I discussed the cake disaster with my Husband and he replied rather matter of factly  ‘I hope you did not use old eggs as Mary says only to use fresh eggs as they give much better volume’ this from the man who would struggle to boil an egg!  I took this as a sign I had been subjecting him to watch these programmes too much as he even if he could quote from it.

We all have cake disasters and usually it is when we so desperately need the cake to go right at least mine was at home and not in front of millions of viewers so my heart does go out to the contestants of the Great British Bake Off they must have nerves of steel.  I guess it was not Marys fault but mine somewhere along the line and will I ever find out what went wrong – probably not.  A baking disaster can make us more determined to carry on, keep calm and bake and if nothing else it makes you laugh.

Just think of all the other uses for this cake – flat pack for posting , paperweight, bookmark, mini tray, the possibilites are endless and how many pro bakers like Mary Berry can say that.

For some ideas on other things you can make and hold over your head see here for toffee meringues (yummy).

Luckily for me attempt 2 was much better and I had a very happy friend who told me she hid her birthday cake so her husband and children in the house could not find it and eat it – she said that when someone makes her cake like that she is NOT sharing – got to love her!